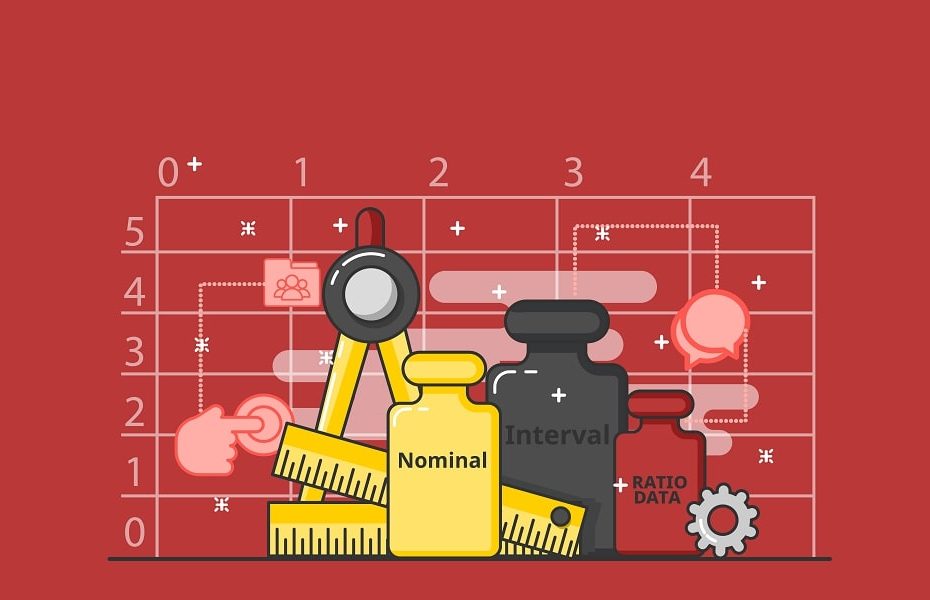 Each of the measurement scales builds on the other. Scaled questions, no matter what they are, derive from these four measurement scales. For example, a Likert scale is a type of ordinal scale used to measure sentiment (and at times frequency).

The classifications are important because they determine the type of statistical analysis you can do with the survey data you collect. In this article, you’ll get an in-depth rundown of the different types of scales, how they can be used, and when to use them in your research.

What are the nominal, ordinal, interval, ratio scales really?

Nominal, ordinal, interval, and ratio scales can be defined as the 4 measurement scales used to capture and analyze data from surveys, questionnaires, and similar research instruments. All of the scales use multiple-choice questions.

Psychologist Stanley Smith Stevens created these 4 levels of measurement in 1946 and they’re still the most popular. Here’s a quick table showing you the kind of calculations each one can be used for.

Let’s look at each one in turn.

Nominal scales (also known as a categorical variable scale) refer to variables, categories, or options that don’t have a regular order or ranking that has universal application. For example, male and female are both categories but neither one can be ranked as number one or two in every situation.

In research, nominal data can be given a numerical value but those values don’t hold true significance. If you use the assigned numerical value to calculate other figures like mean, median, etc. it would be meaningless.

Imagine using a nominal scale and giving male a value of 2, female a value of 4, and transgender a value of 6. If you were to calculate the mean, median, mode, etc. using those values it would have no real implication.

A simple way to think about nominal data is to consider them labels for the information you want to collect. Each label is exclusive, doesn’t have any overlap, and lacks numerical significance on their own.

What phone brands have you used in the past?

What is your gender?

What is your highest level of education?

In the nominal scale examples above, only the names of options (the nominal variables) hold any significance to the researcher. For the survey question presented, it wouldn’t matter if Samsung, Apple, or Nokia were first or last on the scale. What matters is the number of respondents that select each option.

Nominal scales can, to an extent, overlap with ordinal scales because a few of them have order. For example, very short, short, tall, very tall could be considered a nominal scale with an order.

Nominal data can be collected with an open-ended or multiple choice question but the open-ended approach is frowned upon. The latter option is more common and arguably more accurate. Though they appear simple, nominal data is the foundation of quantitative research and is among the most used measurement scale.

The ordinal scale is the second level of data measurement and encompasses the nominal scale. With an ordinal scale, the order of the values (ordinal variable) is important but the difference between values is inconsequential.

That’s because, due to the nature of the options presented on the scale, there’s often no way of knowing the degree of difference between them. Even when the difference between options is quantifiable, it doesn’t yield much insight when compared to the order of the values.

For example, an ordinal scale around income may have the options:

In the above example, there’s a clear difference between good and very good but how would you measure that? Is there an objective way to say that very good is x units better than good? No, there isn’t.

These scales are used to understand and quantify categories that don’t have a mathematical aspect such as frequency, happiness, satisfaction, degree of feeling, etc. It’s easy to remember because ordinal sounds like order and the ordinal data gains its significance from the order of the items being measured.

Both ordinal scales and nominal scales have descriptive qualities. The key difference is the fact that there’s a relative position of labels. Even though we can’t quantify the difference between ordinal variables, we know one is higher or better than the other.

Keep in mind that ordinal data sets don’t have an origin of scale so we can’t, with certainty, say where the scale truly starts or ends.

How was your recent customer service experience?

How often do you go to the gym?

Ordinal data is represented and analyzed in a number of ways. The most popular of which are graphs that break down the percentage of answers options selected. Additionally, these graphs can show the absolute number of respondents.

Examples of this would be time, temperature (Celsius, Fahrenheit), credit score, and more. In each of these examples, the difference in value is known and easily calculated. Someone with a credit score of 720 has a higher score than someone with 650.  We know one is greater than the other and we know EXACTLY how much larger the value is.

This is the first scale where you can do true statistical analysis. Like the ordinal scale, the interval scale doesn’t have a starting point that’s already been decided or true zero. For example, credit score is an interval scale but it starts at 300.

With that being said, every point on the scale is equidistant from the next.

Example of an interval scale

How likely are you to recommend us to a friend or colleague?

The major challenge with interval data is that there’s no true zero so deeper statistical analysis is impossible. This is where the ratio scale comes into play.

Ratio scales are the cream of the crop when it comes to statistical analysis because they have everything you need. A ratio scale has an order, a set value between units, and absolute zero. It’s an interval scale with a true zero.

Examples of ratio scales include concentration, length, weight, duration, and more. Because there’s a zero position, it opens up the doors for inferential and descriptive analysis techniques. Use ratio scales to understand the size of the market, market share, revenue, pricing, etc.

You can only find mode with nominal scales, you can find median with ordinal scales, interval scales lend themselves to mean, mode, and median. Ratio scales can use all of that plus other methods such as geometric mean and coefficient of variation. Arguably, ratio data is the most versatile.

Note: The proportion between two units of a ratio scale is meaningful. On an interval scale, they’re not. For example, 20 pounds is twice the weight of 10 pounds. A credit score of 600 is not twice as good as a credit score of 300 because it’s not a ratio.

What is your weight in pounds?

What is your age?

These two scales are closely related and it sometimes causes confusion. There are two things that stand out as differences with interval variable scale and ratio variable scale.

Knowing the type of statistical scale to use in specific situations can help you unlock better data and run a more efficient survey analysis.

Let me know what you think in the comments and don’t forget to share.