What is The Rule of Three in Writing And How to Use It?

Psychology has a special place in writing. The rule of three is especially powerful because people can easily remember things in groups of three.

A book having three characters, a novel written in three parts, and a central story idea having three friends are all examples that reflect the potential of three in writing.

The human brain is wired in such a manner that it can remember three things easily but gets confused if there are too many characters in the story.

This article dives into the rule of three in writing, why it is so special, and how to use it to improve our writing.

What is The Rule of Three?

The rule of three is a writing principle based on the idea that the human brain processes information as patterns. 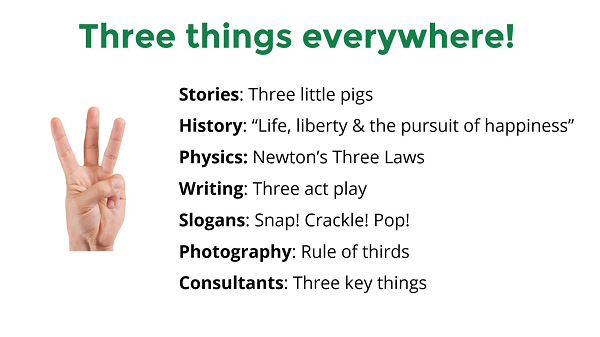 Three is the smallest number that humans remember as a set.

Hence, anything that is written as three is more satisfying, humorous, and catchy.

Using the rule of three in writing takes advantage of the way our brain is wired to convey information and make it stick. Even the best marketing books follow this rule.

Why is it so Special?

Human brains are good at patterns and remember them more easily. The rule of three creates a comfortable pattern and makes information more memorable.

Life, liberty, and the pursuit of happiness are the three important words in American history. It is even referred to as the most influential phrase in the history of the English language. When you add the rule of three to a phrase or a speech, it goes from good to great.

You can use the rule of three to:

Now, let’s look at the importance of the rule of three in storytelling.

Importance of Rule of Three in Writing

Hence, it is widely used while writing a book, script, or even dialogues and slogans.

Rule of Three and Storytelling

The first one is the beginning where you introduce the characters involved in the story with the help of a scene from their day-to-day life in order to attract the attention of the audience.

The middle part is undoubtedly the longest one and involves a whole lot of twists and turns of the characters involved in the story. Then comes the climax, where the storytelling ends and all loose ends are tied up.

Many famous stories use the rule of three prominently. They include The Father, The Son, and The Holy Ghost, The Three Musketeers, Three Ghosts of Christmas Past, Three Little Pigs, and the Three Wise Men. 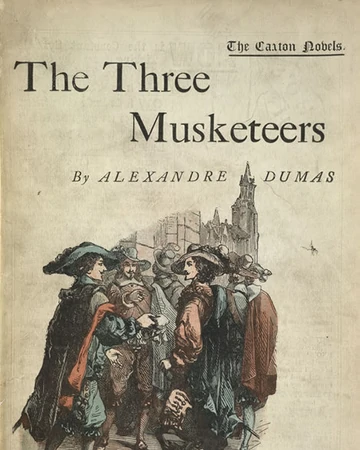 Sticky Ideas And The Rule of Three

Any piece of information presented in a group of three sticks to our heads instead of a cluster of items given together.

Hence, try to write the information in clusters of three-pointers—for instance, advantages, process, and examples. 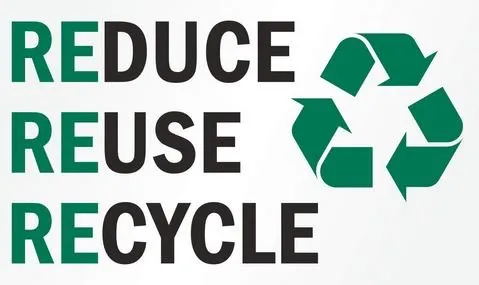 Some of the classic examples of the rule of three slogans stuck to our minds are mentioned below.

How to Use It?

The Three Act Structure is a writing model that divides the story into three parts, namely the setup, the confrontation, and the resolution.

A good write-up should have a legit set up to keep it intact and flowing. By setup, I mean the brief introduction of the characters involved in the story plot so the readers can connect with them during the story, and no confusion pops in.

If you are writing a movie script or even a book, it is always a good idea to introduce your characters first. Show how their everyday life looks and the turning point or the incident that changes or kicks in the story plot.

You should avoid writing monotonous and boring paragraphs describing the character. Always remember, your introduction is the most crucial part of your content. If you fail to improve customer engagement, all your efforts will go in vain.

You have to plan your setup smartly and wisely and keep yourself in the shoes of your readers or viewers.

Your story’s middle part is undoubtedly the longest and most challenging to get right.

The second part is crucial because all the twists and turns of the story are going to take place here.

For instance, Jessica’s team won the championship, but Adriana was not sad at all, even after losing. Because, somewhere deep down, she knew what she had won.

They eventually start to meet quite often, and they experience the most intense passion-dip.

The story takes a sharp turn when Adriana is diagnosed with stage 3 prostate cancer.

You don’t have to follow monotonous forms of ending or climax.

Your climax should be intense and thought-provoking irrespective of whether your conclusion is happy or sad.

An excellent story plot is something that holds the attention of the viewers till the very last moment and gives a climax that the viewers never saw coming.

For instance, after Adriana was diagnosed with cancer, the doctors lose hope, and Jessica thought she was going to lose Adriana.

But she never truly lost hope and continued the medical proceedings and left no stone unturned in taking care of the woman of her dreams.

Adriana’s condition started improving, but the doctors said she would never be able to have kids. It was difficult for Jessica, but she accepted it, knowing that she at least had Adriana.

This is how you can follow a three-act structure in writing to make your story memorable.

Tricolon is basically a rhetorical term that incorporates three parallel clauses, words, and phrases. It is also known as a triadic sentence.

It can also be referred to as the combination of three lines, stanzas, paragraphs, or even chapters.

One of the classic examples of Tricolon or triadic sentences is “Veni, Vidi, Vici” which is given by William Shakespeare in Julius Caesar. It basically means “I came, I saw, and I conquered.

Tricolon is used to provide a sense of completeness and weight to the phrases.

If some old wives tale is to be believed, using Tricolon phrases helps the readers remember the information almost effortlessly because it has a significant impact on the psychology of the audience.

Many marketers, PR agencies, and paid media agencies thoroughly understand the importance of the Tricolon and also have used it as their marketing slogan.

Let us consider some of the brilliant examples of Tricolon phrases or clauses that personify the overall meaning.

Hendiatris is a figure of speech that is used to emphasize three different words to express a single idea.

Many companies or marketers have sought help from Hendiatris and have created beautiful and impactful slogans or mottos that provoke unintended recall.

Let us understand Hendiatris better with the help of a few examples.

Not just writing, three holds a special significance everywhere in the world like Newton’s three laws in Physics or the Rule of Thirds in designing.

For writers, it is crucial to follow the rule of three because it helps the readers remember the characters in the story, and if people can remember the story, they will make it popular.

Successful writers and marketers have used it for a long time. AI writing tools like Jasper AI are even using the rule of three to write compelling copy. It’s something we’ll see a lot more of in the future.

The Latin phrase ‘Omne trium perfectum’ means three is perfect for everything. You can use the power of three for writing marketing materials, presentations, video scripts, or jingles.

This site uses Akismet to reduce spam. Learn how your comment data is processed.

There are shocking statistics around the number of businesses that fail. Some sources say as many as 90% don’t make […]

Despite all the flak it receives, email marketing can earn up to a $44 ROI for every dollar spent. In […]

Marketing is tough. Marketers have to juggle their budgets with existing channels that constantly change and evolve, along with new […]

LinkedIn, as I’m sure you’re aware, is one of the largest social media platforms in the world. It’s unique in […]