How to use Experiential Marketing For Insane Results (+Examples)

To understand the allure of experiential marketing, ask yourself why people pay hundreds or even thousands of dollar to attend live events.

Why do we go to sports games when you can get a better view from your home?

Why do we go to concerts when it’s possible to watch them on YouTube?

Marketing is one of the most challenging and rewarding disciplines in the world. As a practitioner, you’re responsible for generating leads, increasing engagement, and sometimes selling to them. Experiential marketing adds another layer to the mix which can be a benefit or a drawback.

When done right, you’re able to create an immersive experience for your customers. They talk about you, appreciate you, and buy from you.

If you do it wrong then you’ve spent a pretty chunk of change for no reason. Experiential marketing is more than a buzzword, it’s a major key to creating long-lasting impressions in the minds of your customers.

This article defines experiential marketing, the benefits and drawbacks, and how to use it to grow your brand.

What is experiential marketing

Experiential marketing is many things to many people. For some, it’s an in-person activation. For others, it’s an experience that uses multiple sensory inputs and forces the viewer to interact with it.

An interactive experience which is fun and memorable that creates a closer bond between brand and consumer. It may or may not have an in-person element but there is an opportunity for the viewer to become part of the experience.

At the same time, a webinar in which the host solicits feedback from the audience and reacts to it could be considered experiential marketing.

However you define it, experiential marketing works to increase the profile of your brand and sell more products. 74% of consumers say that engaging with branded event marketing increases the likelihood of them buying the promoted products.

Because of the interactive nature, it can be more effective than any advertisement.

Here’s an over the top example from Tim Hortons:

Experiential marketing allows you as a business to bridge the gap between your public perception and the reality of what your brand and its message. This has become more important in a world that demands transparency.

You’re able to use various mediums to showcase the value you bring to the table, increase engagement, and deliver unique creative experiences. A positive conversation is started about your brand that leads to more interest and, eventually, revenue.

Don’t look at experiential marketing as simply a branding exercise. When activations are done right, it can also result in instant revenue.

An example of this would be taste testing in stores such as Sam’s Club. 48% of people say they are more likely to buy a new product if they can try it first.

It’s not all roses. There are also drawbacks of experiential marketing.

First, it can be hard to measure. Yes, people may purchase on the spot but there are many who file the experience away for later. Maybe they don’t need your product right now or don’t have the budget for it. When they do finally purchase, how do you attribute that activity?

While experiential marketing doesn’t have to be in person, it does have to provide a tangible interaction. That means the reach, by default, is limited. People who see videos or images after the fact don’t get the full experience.

When and how to use experiential marketing

To succeed with experiential marketing, it’s important to target the right person, at the right time, with the right message, and in a way they’re open too.

You could target someone preparing for a wedding with a message about your new dresses but botch the execution. A culturally insensitive brand activation can result in a lot of backlash which no company wants.

This happened with Puma when it tried to highjack Ash Wednesday for a marketing stunt. They placed “shrines” of the new Italy jersey for the 2014 FIFA World Cup in multiple cities around the world. Fans were encouraged to kneel in front of it. 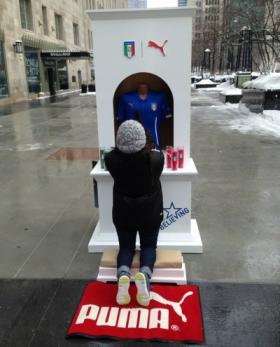 It was received in good taste by most but a few people were less than amused. Just like with any other marketing campaign, understanding your audience is key.

A common question about experiential marketing is “where does it fit in the funnel?” is it only good for awareness or can we also use it to turn people into customers on the spot.

The short answer is both. You can introduce people to your brand in a more intimate setting and encourage them to buy on the spot. If people don’t buy immediately, they may still buy later.

There are multiple elements that should be in place to get the most out of your experiential marketing campaigns.

A system of measurement

It depends on many factors such as your goals, the product, and the medium.

For example, in 2016, there was a massive Ghost Busters installation in London’s Waterloo station used to promote the film’s reboot.

A massive overnight install for the team last night, with just 5 hours the guys did well! #ghostbusterswaterloo pic.twitter.com/pvDOQorFYJ

It was well received by commuters and plastered all over social media. In the end, it amassed 52.6 million impressions. The campaign itself could be considered a success but did that translate into box office sales for the movie? It grossed over $200 million worldwide but it still ended up as a loss for Sony.

This comes on the heels of a clear system of measurement. When you decide on the goal, it becomes much easier to determine what should and shouldn’t be measured.

With some products, it’s easier to decide on your goal. For example, if you’re selling T-shirts and set up a pop-up shop in the mall then, of course, you want to sell shirts.

If, like in the example of Ghost Busters, you’re selling an intangible product then the goal can take many forms. You set a goal related to total media impressions or your goal can be to increase sales. In certain cases, you may want to generate leads.

Whatever you decide on, stick with it and set up a system of measurement ahead of time.

Finally, you should have a compelling story behind your experiential marketing campaign. The best experiences have a narrative that people are able to talk about long after the event has ended.

Whatever story you choose to create should be a part of your larger brand narrative. It wouldn’t make sense if you were a clothing company that championed sustainable materials then had a brand activation that threw those values out of the window.

It’s an extreme example but still something that you should be aware of and take steps to get right. Now that you’re familiar with the elements that make up successful experiential marketing campaigns, let’s take a look at the different types.

Not all events you create need to be grand enough to be picked up by CNN. Experiential marketing campaigns take many forms. Some are large some are tiny. The focus should be on the experience you create not how much money you spend to make it possible.

These are the most common, especially in a business to business setting. You can use classes and workshops to engage with your target audience while providing value in the form of education. I like this method because it doesn’t need to be in person but has a similar outcome.

Creative Live is a great example of using workshops and classes. It has a paid membership but you can also view classes live online. The people present at the venue are able to interact with the instructor in real time. 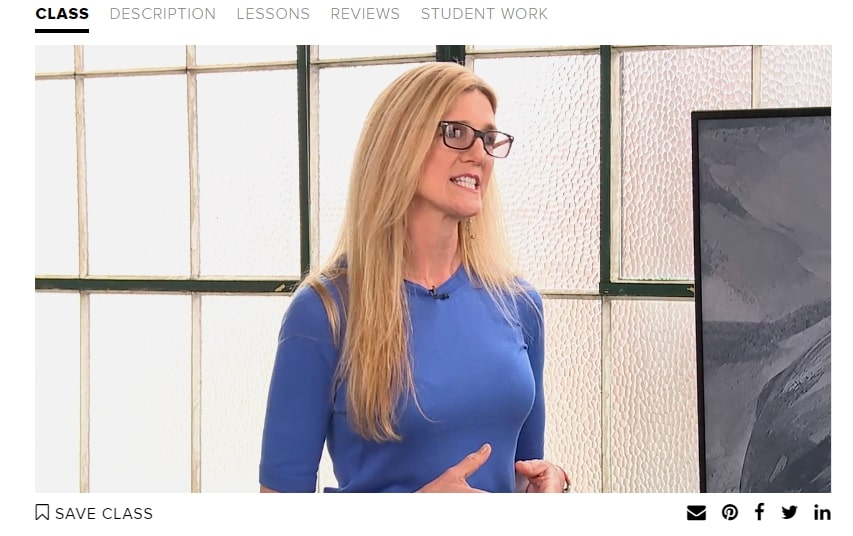 I use the term pop-up shops because that’s the most recognizable type of pop-up experience. It’s by no means the only type, there are pop-up art installations, music exhibitions, food tastings, and more.

Whatever form the pop-up experience takes, the goal is the same – to enhance the experience of the customers and build a deeper connection.

The organizations who’ll benefit the most from pop-up shops et al. are those that don’t normally have a physical presence or one that’s limited. For example, an online-only retailer or a retailer that only operates out of one location.

Conversely, an artist would be able to use a popup exhibition or concert to connect with fans and spread their message. Take advantage of SMS marketing campaigns, email marketing, and other digital media to build anticipation for your event.

Jay Z performed at a type of popup concert for his music video Picasso Baby.

The audience was able to interact with him directly and influence the direction of the performance.

Birchbox is an online retailer that lacks a noticeable physical footprint. When it launched a new line of gifts for men, it also opened a pop-up shop in New York to create awareness.

While it may not be impromptu for you, it is for the participants. Remember that your experiential marketing campaigns don’t have to affect as many people as humanly possible. Its goal is to create a meaningful connection. Sometimes, smaller is better.

Focus on how creative and interesting the experience is for the participants.

Ed Sheeran wanted to give fans an experience that money couldn’t buy so he charged $2 for a 30-second private performance. The only caveat: it was located in a seedy place being sold by a seedy salesman. Most people didn’t bite but the few who did were shocked and excited.

A few years ago, Maroon 5 went around Los Angeles crashing weddings and performing the song Sugar. The brides were caught off guard and the video has amassed over 2 billion views as of this writing.

WestJet Airlines took the giving tradition seriously during the holidays. They asked everyone on a flight the night before Christmas, what they wanted for Christmas. Some people were cheeky and asked for socks while others told Santa what they really wanted.

In each example, the number of people involved was small. It didn’t stop the videos from spreading across the world. This shows us that even if people aren’t there to experience it, they still love watching what happened.

The reason we have experiential marketing is to introduce and educate people about your brand. Many times it helps them make an informed buying decision. Product demos, when done right, can be an amazing way to help customers experience your promise.

65% of customers say that product demonstrations help them understand the product better than any other marketing or advertising method. It also creates a two-way interaction between you and your prospects.

To turn this into a true experiential marketing campaign, it’s important to liven the basic demo up.

Nooka watches used augmented reality to make it possible to try on their watches from anywhere in the world. All you need is a computer and a webcam to make it work.

Experiential marketing is an effective way to engage your customers, create goodwill, and increase sales. It can be tempting to jump in and start planning the event but there are a few things that need to be in place first:

When you have that in place, choose the type of experiential marketing campaign you’ll perform and get started.

Let me know how you’re using experiential marketing in the comments and don’t forget to share.