It’s about time we started optimizing for humans.

I started my journey into all things digital a little under a decade ago. What works has changed.

It was easier to get an email address. It was harder for people to pay for things.

There weren’t so many digital services. It was hard as hell to get a payment processor that you liked.

Building a website was a grueling process. Now, It takes all of twenty minutes from domain purchase to going live.

One thing that’s remained the same is our inexorable march towards adapting offline interactions to an online world. Personalization, live chat, and user experience advocates reflect this shift.

The path has been anything but straight. It reminds me of the line success takes. 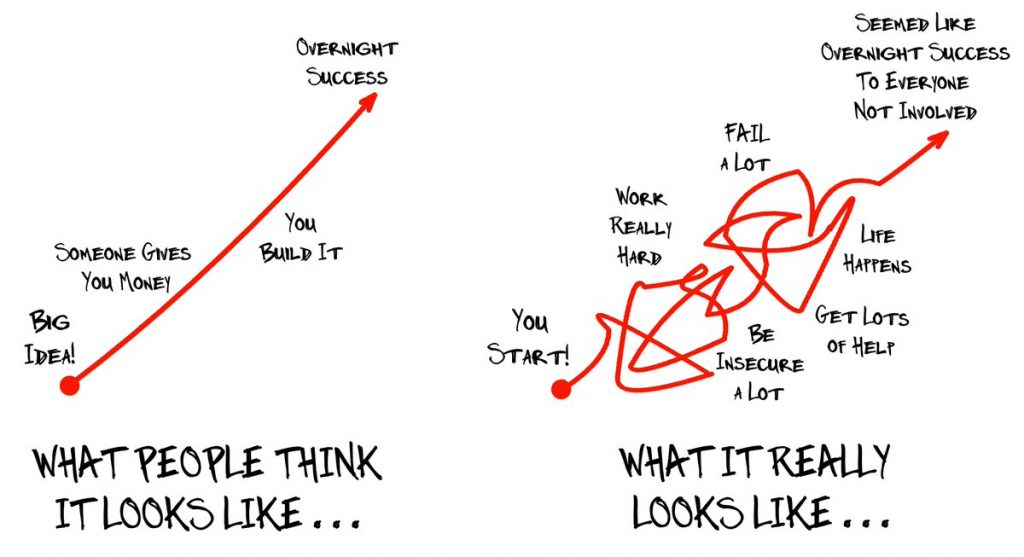 We’re not where we need to be. Not by a long shot. We’re well on the way to getting there. There’s no turning back at this point.

Yes, the barrier to entry for a digital brand is lower. At the same time, the barrier to success has been raised. Startups have millions in funding, growth teams, and advanced analytics.

The bootstrapped company, the blogger, and the solopreneur have the same tools on the surface. The topical view is rarely accurate. Can you implement all the tactics, analyze the data, read all the books, and chase growth at all costs?

That’s why it’s important to optimize for humans.

A quick primer on the journey of web optimization

There have been a number of loose phases when it comes to how people optimize on the web. I’ve split them into three.

The first phase was about chasing a quick buck. The techniques were more or less copied and pasted from direct response marketing. You had the long pages, the underlined words, the fear of losing, the psychological triggers, and everything in between.

Now, don’t get me wrong. My constant companions were (and are) The Gary Halbert Letters, The Robert Collier Letter Book, and The AdWeek Copywriting Handbook.

I recommend them to this day.

The methods they employ are effective. Gary has personality for days. Robert has countless templates you can adapt to email. The Copywriting Handbook is just that, a handbook to be used. They’re best suited to the Wild West era of the web when everything was focused on the visitors who would convert on the first interaction.

It’s a bit different now. It takes multiple interactions to get a conversion. Adopt the fundamentals from them, those will never expire. Everything else can be tossed. I mean the tactics. Tactics are for specific situations.

After the web came to its senses and realized it was more profitable for Google to send them traffic, they optimized for search. All you had to do was send a thousand spammy links to your site, keyword stuff the title, and you’d be ranking in a few days.

The quality of the sites on the first page of Google were, to say the least, poor. Real sites whose owners didn’t understand the intricacies of Search were pushed to the second, third, and fourth pages.

A whole industry sprung up around optimizing for search engines. Many times, they preyed on business owners who didn’t know any better.

They basically said “Look, SEO is hard. Give us thousands of dollars and in a few months we might be able to help you rank. No guarantees.” Imagine if your accountant told you that when you asked if your books were in order.

Today, the practitioners are called SEO’s, publications are dedicated to news about SEO, and it’s no longer about stuffing keywords in the title.

People were tired of search results that sent them to useless websites with direct response sales tactics. Internet users are utilitarian. If the app isn’t benefiting them, they’ll drop it in a heartbeat.

The Big G figured this out. It had two options:

1.      Lose billions of dollars because they weren’t useful

2.     Give prominence to websites that were useful to their product (if you’re not paying for an awesome service then you’re the product. Google is awesome. We’re the product.).

They chose the latter. They spearheaded the phase we’re currently in.

Every blogger, corporation, and small business owner has begun to optimize for humans. It’s evident when you look around. Facebook tells you when your friends have birthdays. Google shows you results based on the ones you clicked in the past. Amazon sends you emails based on your browsing history.

Even small companies are doing it. Emails have your name in the text, they remember your birthday, and you’re shown offers based on the content you interact with (at least that’s how it’s supposed to work).

Going further, service on the internet has begun to mirror service in real life. Organizations are reaching out to users to have real conversations. Like, they’re asking to schedule phone calls so they can figure out how to serve you better.

Net promoter score was implemented to figure out how people feel about your company and why.

It allows us to ideate, launch, and iterate in the blink of an eye. We’ve adopted an approach that allows us to create in the open. We share our failures and successes with the world. GE did it with their icemaker Opal on IndieGogo.

Brands are humanized – just a bit.

It’s no longer a big corporation calling the shots. Rather, it’s a hundred thousand individuals plotting the course iteration after iteration. If you, my customer, doesn’t like it, I won’t spend countless dollars trying to get you to like it.

Consumers have countless options in every field. They wield the power. It’s no longer enough to optimize for sales or search. Those things matter and they always will. You’re in business to make money.

The approach is what’s different.

The more happy customers you have the more you can acquire.

It all starts with a decision – to focus your company on humans. To optimize communication, marketing, and products for humans.

KyLeads is a product focused on conversion rate optimization. It allows our customers to build opt-in forms and quizzes to get more email subscribers and generate more revenue.

We’ve made optimizing for humans a way of life at our company. Everything from the way we design features to the topics we write about is focused on humans.

The next step is to empower our customers to do the same and reap the rewards.

Introducing Optimizing for Humans – a blog on marketing, conversion rate optimization, growth, and startup lessons. You’ll learn about our wins and losses, how to spread your message the way people want to receive it, and everything in between.

Sometimes it’ll be a short piece on an insight we just gained. Other times it’ll be an in-depth post about a marketing strategy. At all times, it’ll take you further down the path of optimizing for humans and reaping the benefits that come with it.

The web is changing – fast. Tactics come and go every week. What remains are the fundamentals. Humans like to be treated like humans. They’ll forgive almost anything else.

We’re dedicated to empowering you to walk the walk and talk the talk of putting your customers first. In the process, we’re opening all our doors and showing you what works, what doesn’t and everything in between.

Join us on the journey by signing up for our newsletter – a piece of humanity – to get exclusive content and a weekly article.

This site uses Akismet to reduce spam. Learn how your comment data is processed.

You use forms on your website to receive information from visitors. Unfortunately, most forms do more harm than good. Instead […]

150+ of the Best General Trivia Questions For a Great Time

With our increasingly busy schedules, it can feel as if the simple pleasures – like a few trivia questions – […]

Last Updated on July 9, 2020 Headline formulas are like the holy grail of blogging, landing pages, opt-in forms, and […]

Demographic Segmentation: Definition, Examples & How to Use it

Last Updated on August 5, 2020 A segmented market is valuable. Demographic segmentation is often the first step in creating customer […]